JAEN
TOP
About us

Applicants can file for trademark protection in Japan in two ways: i) directly with the Japan Patent Office or ii) under the Madrid Protocol.

(i) Trademark registration with the JPO

This is the simple and cost-effective way, assuming that an applicant seeks registration of a trademark only in Japan. It takes about six months from the filing of a direct trademark application to obtain a trademark registration, if everything goes smoothly. Provisional refusals from the Japan Patent Office can increase the time to reach a decision by about three months, and delays in the payment of the registration fee can also slow down the process.

Here is a summary of the application procedure with the Japan Patent Office (JPO). 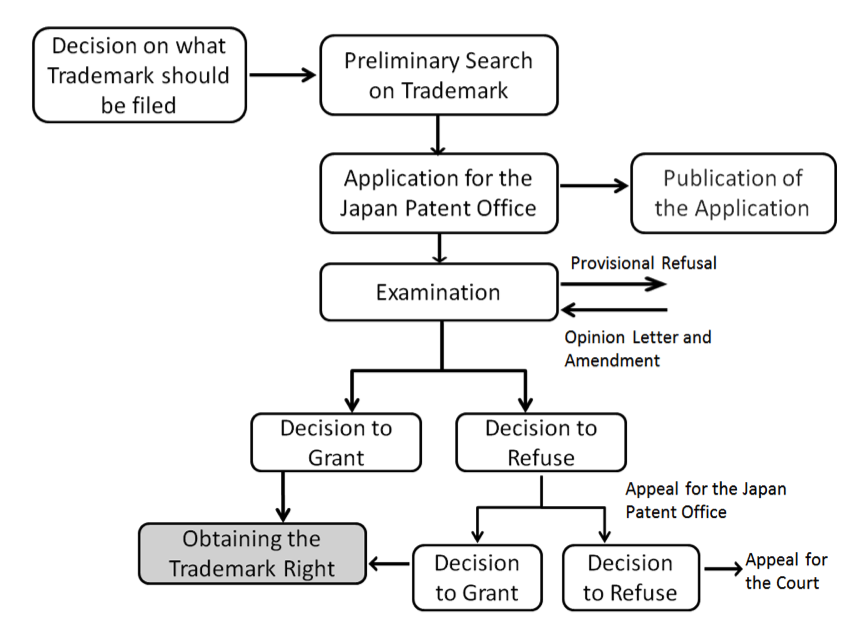 (ii) Application under the Madrid Protocol

The Madrid Protocol is a convenient and cost-effective solution for registering and managing trademarks intended to have a worldwide scope. Filing a single application allows an applicant to easily and cost-effectively seek protection in many countries.

However, when you seek protection using the Madrid Protocol in Japan, the Japan Patent Office will often issue a provisional refusal, requiring the appointment of a representative in Japan. Dealing with a provisional refusal is sometimes very complicated – we have stores of expertise on overcoming this setback, and we’re happy to assist you with the process.

We have an excellent track record efficiently overcoming these refusals by responding with a reasoned opinion letter. In those letters, we consider the particular goods or services, and typically decide to (a) insist that the goods or services in conflict are not confusingly similar, (b) restrict the Similar Group Codes to those which cover seven or less goods and services, (c) argue with evidence that the applicant will put the trademark on all the goods and/or services, through what’s known as a ‘proof of use’, or (d) seek another method, best suited for an individual applicant with distinct application issues. We’re always happy to efficiently help clients through these matters.

If you have a question or need support, please use the contact form below.